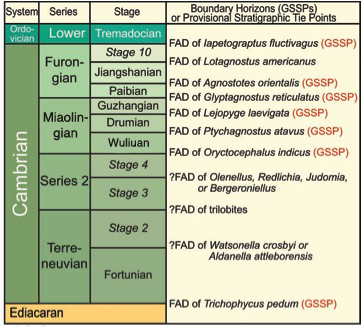 In 2005, the International Subcommission on Cambrian Stratigraphy (ISCS) voted on, and adopted, a plan to subdivide the Cambrian System into four series and 10 stages. Each series represents an integrated package of biotic and oceanographic events whose signals are broadly identifiable by multiple time-stratigraphic methods. Stage-level subdivisions are envisioned to represent subequal divisions of series whose boundaries can be narrowly constrained on a global scale using a combination of biostratigraphic, chemostratigraphic, sequence-stratigraphic, and other techniques. (see Babcock et al., 2005)

Cambrian boundaries listed according to their year of ratification

Ratification of the GSSP at the base of the Cambrian System also automatically defined the bases of the Phanerozoic Eonothem, the Paleozoic Erathem, the lowermost Cambrian series (unnamed until 2007) and the lowermost Cambrian stage (unnamed until 2007). Ratification of the Cambrian GSSP automatically delimited the top of the Ediacaran System, the Neoproterozoic Erathem and the Proterozoic Eonothem.

The GSSP is 2.4 metres above the base of the Mystery Lake Member of the Chapel Island Formation, Fortune Head Section, Burin Peninsula, Newfoundland, Canada. The horizon coincides with the lowest known occurrence of the ichnofossil Treptichnus pedum (also published as Phycodes pedum, Trichophycus pedum and Manykodes pedum) as recognized in 1992.

Ratification of the GSSP at the base of the Ordovician System also automatically delimited the top of the Cambrian System. The GSSP is in the Green Point section, Newfoundland, Canada. The horizon coincides with the First Appearance Datum (FAD) of the conodont Iapetognathus fluctivagus.

The GSSP is 396 m above the base of the Huaqiao Formation in the Paibi section, Hunan, China. “Paibian” refers to Paibi Village, in the Wuling Mountains, Hunan. “Furongian” refers to “Furong”, meaning “lotus” in Chinese. It comes from a nickname for Hunan Province, the “Lotus State”. The horizon coincides with the FAD of the agnostoid Glyptagnostus reticulatus.

The GSSP is 62 metres above the base of the Wheeler Formation in the Stratotype Ridge section, Drum Mountains, Millard County, Utah, USA. The horizon coincides with the FAD of the agnostoid Ptychagnostus atavus (also published as Acidusus atavus). “Drumian” refers to the Drum Mountains, Utah.

The names “Fortunian Stage” and “Terreneuvian Series” were ratified in 2007, although the GSSP defining their conterminant base was defined at the time that the base of Cambrian GSSP was ratified. “Fortunian” refers to the Fortune Head section, and “Terreneuvian” comes from an early French name for Newfoundland.

The GSSP is 121.3 m above the base of the Huaqiao Formation, Luoyixi section, exposed along a roadcut on the south bank of the Youshui River, 4 km northwest of the town of Luoyixi, Guzhang County, China. The horizon coincides with the FAD of the agnostoid Lejopyge laevigata. “Guzhangian” refers to Guzhang County, in the Wuling Mountains, Hunan.

The GSSP is 108.12 m above the base of the Huayansi Formation in the Duibian B section, Jiangshan County, Zhejiang Province, China. The horizon coincides with the FAD of the agnostoid Agnostotes orientalis. “Jiangshanian” refers to Jiangshan County, Zhejiang. The ASSP is 61.2 m above the base of Unit 8 of the Zhumabai Formation, Kyrshabakhty section, Malyi Karatau, Kazakhstan.

The Wuliuan Stage is the lowermost stage of the Miaolingian Series. The conterminous base of the Wuliuan Stage and Miaolingian Series is defined by a GSSP coinciding with the widely distributed oryctocephalid trilobite Oryctocephalus indicus. The stage name is derived from Wuliu, a small hill near Balang Village, Jianhe County, about 2.5 km northwest of Jianhe township, eastern Guizhou, China. The GSSP is 58.2 m above the base of the Kaili Formation in the Wuliu-Zengjiayan section. The stratotype section is exposed in natural outcrops situated along a ridge between Wuliu and Zengjiayan, which is about 0.5 km north of the Balang Village (Zhao et al., 2012).

Provisional stages and series in the Cambrian

Stages 2, 3, 4, and 10, and series 2 are undefined by GSSPs (as of July 2013). The use of numbers to identify these units is provisional. When a GSSP for each of these units has been ratified, the provisional name will be replaced by a new name based on a geographic locality.

A brief history of Cambrian subdivisions and goals of the ISCS by Shergold and Geyer (2002) can be downloaded here.